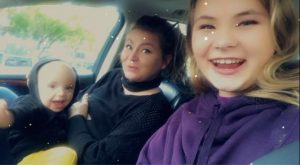 “I hated going into public places to use the bathroom when I was homeless. Everyone looked at me like I was a criminal.”

This is Leslie. Leslie is now permanently housed with her three children. She is employed full-time at Sacramento CASH, and in fact, she just received a promotion.

Leslie is a longstanding part of the HART community. She worked with the Outreach Navigator when she was living in a ditch a few years ago. She frequently attended the respite center and shower program at Carmichael Presbyterian Church. Many of you may have spent time getting to know Leslie.

After becoming comfortable in the HART community and working with the Carmichael Outreach Navigator, she moved into SSHH’s Transitional Housing program. There, Leslie spent time getting sober and working on her other barriers to housing. She proceeded to move into other housing programs in Sacramento. Thanks to receiving an Emergency Housing Voucher, Leslie moved into her own place.

Assistance from housing programs and public funding was critical to Leslie achieving housing. However, Leslie attributes her success and her motivation to achieve a life of sobriety and stability to the HART community and the volunteers who lead its programs.

“When I would attend a respite center, I was just any other human. I could rest, charge my phone, and be safe. Whatever my decision was, Scott (the President of Carmichael HART) accepted me and provided me aid. Scott and HART looked at me like I was a person.”

Carmichael HART is in the business of providing hope and low barrier services to the local unhoused. We believe anyone, regardless of their condition, deserves the humanity of a roof over their head, people who care about them, a meal and a shower. 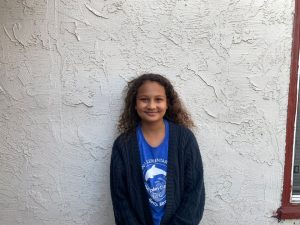 “Greta Thunberg is my inspiration. Like her, I want to change the world.”

This is Emily. Emily is nine years old. Her favorite subject in school is art. She is the daughter of Erin, one of the first graduates of Charlotte House.

“I think people should not judge those living on the street. They are people like you and me who are going through a difficult time,” Emily says.

“I remember asking my mother when we were sleeping in the car, why we couldn’t go inside. It taught me that everyone has different challenges.”

One of the reasons Erin moved into Charlotte House was to be close to Emily, who was living with her grandparents and attending Deterding Elementary School in Carmichael.

“I wanted her to stay in the same school,” Erin says.

Emily recalls spending time with her mother and the other Charlotte House residents after school. She looked forward to playing in the backyard with the children of the other residents. To this day they all remain friends.

We are confident Erin, Emily, and her new baby brother are looking ahead.

“The challenges become less difficult when you have a roof over your head,” says Erin.

The goal of our Transitional Housing Program is to give opportunities to individuals and families like Erin and Emily… opportunities to grow, remain a family, and in this case, change the world. We look forward to seeing Emily succeed in school and pursue her dreams of being an advocate for good. 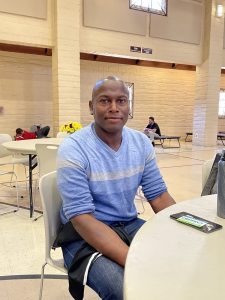 Rodrick has been coming to the Carmichael HART shower program since November 2021. He is a delightful guest.

Rodrick is extremely polite and helpful. He is a wonderful conversationalist. He relates well with the other guests and even helps those who are having a difficult time. He has always expressed his gratitude for the shower program and the Carmichael HART volunteers. Over the months of attending, Rodrick grew to trust us.

Last December, Carol, a Carmichael HART volunteer, mentioned to Rodrick the opening of the new Carmichael HART transitional house for men. Immediately, he was very interested. After years of living on the street, he was ready to find a home.

As of January 2022, he is now housed in the Carmichael HART men’s transitional house.

We are all excited to see Rodrick get off the streets and into housing. We celebrate this step in his journey and look forward to his future success. Carmichael HART found Rodrick on the American River. Thanks to his persistence and Carmichael HART’s support, we are confident he is on his way to a life of permanent housing.

Our volunteer efforts are making a difference! Rodrick’s story illustrates the beauty of Carmichael HART’s work. We are here to support, guide, and give opportunities to homeless men and women. Wherever they are on their housing journey we respond with open arms… and often times a shower and a meal. ——————————————————————————————————

Every Saturday, Carmichael HART reaches out to our unhoused neighbors by offering free showers and other services. Carmichael HART has been doing this since April 2021. The program is staffed by dedicated volunteers and is hosted by Carmichael Presbyterian Church.

Ralph and Rianna have been regular attendees of the shower program since its inception. They were living in their car and actively looking for housing. During this time, many of the volunteers got to know them. Many got close, close enough to call them family. They were polite, helpful, friendly, and gracious guests. “It has been a pleasure to see them every Saturday and to getting to know them,” says volunteer Carol Horst.

Ralph said they had talked to several landlords and applied to many properties but nothing ever materialized. One landlord, out of the blue, told them to come by the next day and talk with him. They came back the next day and the landlord said he’d already rented out the apartment. Disappointed, they persisted and continued to search for housing. In November, after 8 months of searching, they finally found a place to call their own.

Last November, Carmichael HART hosted a Thanksgiving dinner for the homeless. Ralph and Rianna were the guests of honor.

“We are all so happy for them. It has been wonderful to know them and see their success in finding housing.”

Sometimes they come back on Saturdays to visit. It is nice seeing them.