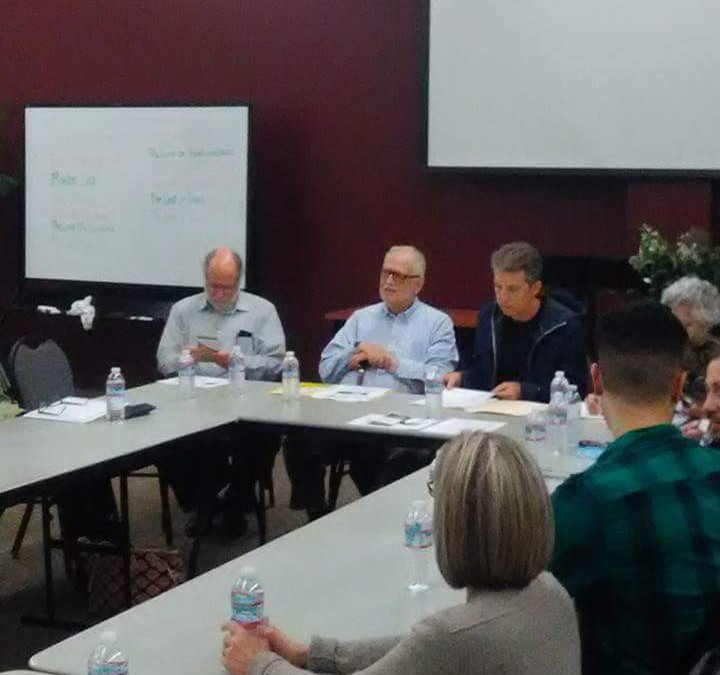 — Meeting began at 6:10 p.m. with an invocation by Norma Niekamp of St. John the Evangelist— Introductions, sign-ins— Announcement: County Supervisor Susan Peters scheduled a community meeting from 6 p.m. to 7 p.m. Feb. 22 at the Carmichael Park clubhouse.UPDATESTransitional Housing Tour: Ken Bennett, Sacramento Self Help Housing (SSHH), led the tour in January at the Cathedral Shelter, transitional housing that lasts for three months with possible extensions. The duplex houses five men on one side and five women on the other side. The St. Vincent DePaul chapter of the Cathedral of the Blessed Sacrament pays for rents and utilities and contracts with SSHH for a house manager and case manager. * Ken said homeless people coming to the church are vetted before admission to transitional housing. * The tour also took in Grace House in Elk Grove, which has transitional housing for singles and sometimes couples. * Ken offered to lead another tour in the coming weeks for interested parties. * Scott Young, ATLAS of Carmichael, said, “We’re looking for options for our community… having models out there give us ideas.”Citrus Heights HART’s Veterans Stand-Down

* Scott said a second annual stand-down is planned for April 18 at Holy Family Catholic Church. Larry Niekamp of St. John the Evangelist and other organizers hope to learn from the Citrus Heights model. Another goal would be to transport Carmichael veterans to the site, where they would receive services such as medical, veterinarian, barbering, dental and other resources.* He said this is the last year for the veterans stand-down at the Mather site. Sacramento County Homeless Count * Scott and two other Carmichael HART participants were among some 300 volunteers who took a “point-in-time” count of the county’s homeless population. A report is expected in the summer to allow HUD to allocate resources based on the count.Greater Sacramento Winter Sanctuary * Carmichael Presbyterian Church (CPC) is the community’s intake site for busing homeless people to county host churches through March 31. Sacramento Self Help Housing and other nonprofits are involved. * Barbara Foley of CPC said the church had experienced a number of challenges doing the intakes for Winter Sanctuary. Preschool parents and neighbors have expressed concerns about the many guests who do not pick up their belongings in the morning and who are “hanging around” when they are supposed to leave the site. The Winter Sanctuary leadership is working with CPC to hire additional staff to address some of these issues.

* Scott said we want to “resolve the issues and have a better experience.”

Joint County-City Meeting on Homeless Issues, Jan. 31 * 12 Carmichael HART people attended a 6 ½-hour meeting with county supervisors and city council members that attracted more than 400 people. * Susan Frost, a county supervisor, told Carmichael HART that the city council members initiated the meeting hoping for cooperation with the county Board of Supervisors, and the joint powers authority, Sacramento Housing Redevelopment Agency (SHRA), which operates an award-winning voucher program. * She said HUD guidelines nullify the vouchers if they aren’t used within certain time limits. Vouchers often are used for rooms in housing complexes where services are provided. * A shortage of rental properties with willing owners means as many as 70,000 people are on voucher-related lists in the county. * Policy-makers are considering if priority rankings should let some homeless people such as families to jump ahead of others who have waited longer. * Carmichael and other unincorporated communities need a voice to overcome a funding advantage of the county’s cities. * A report with recommendations for local government efforts on the homeless front is anticipated by March 31. * Supervisor Frost said the collaboration of faith communities, businesses and other stakeholders “is pretty exciting… we are talking with all of our (homeless) people from all walks. These are mostly good people who need a leg up.” Citrus Heights HART Winter Sanctuary * Deacon Mark Holt of Holy Family thanked Carmichael HART for helping with the seven-week program that ended Feb. 12. He said approximately 70 guests were served by a total of 1,200 volunteers at Holy Family, Celtic Cross, Advent Lutheran, Christ Community, and the Church on Cypress. * Deacon Fred Green of Christ Community Church worked especially hard at various sites before he was hospitalized with pneumonia, a cautionary lesson for volunteers who work as hard as Fred, Mark said. * “We reached out and touched hearts with the love of Christ.” He said sanctuaries gave guests “the ability to come and talk with others and to be reminded, ‘I’m still a human being.’ It’s incredible to see God’s people coming together to reach people in need.” * Pastor Dave Brown echoed that sentiment as he expressed gratitude for volunteers from other churches who helped the Church on Cypress. He said there were no major glitches. Some guests were trying to find jobs but can lose hope, thinking, “I’ll never get off the streets.” He said the church is “in for next year.” * Several other HART volunteers spoke of similar positive experiences. Supervisor Frost said her church, Celtic Cross, placed a sick guest at Grace House. Norma Niekamp said her pastor said after shelter visits that St. John the Evangelist would participate in Carmichael HART’s Winter Sanctuary next year.

* Scott said: “What we experienced was seeing what we can do in Carmichael next year… it’s a benefit to the community that 20 to 25 people are not on the street at night — not only for guests but the community, businesses and faith communities. That’s why we founded HART, looking for long-term solutions to homelessness. This is one of the steps, looking forward to what it’s going to be in the future.” * Ken Bennett said three shelter guests in Elk Grove were placed into transitional housing. He proposed a counseling intern program to run parallel with the winter sanctuary.Committee Updates:  * Advocacy: Justin Giachino of Christ Community Church said the committee is working as the voice of Carmichael HART, advocating for a “navigator” to connect homeless people with resources, building relationships with policymakers, envisioning a triage center and transitional housing, and improved relations with property owners and landlords. The committee plans to meet in March but has not yet scheduled a date or time. Justin brought up a Carmichael Community Meeting sponsored by the Sacramento Sheriff that will take place March 21 from 6 p.m. to 7 p.m. in the library of Del Campo High School. * Housing: Ken Bennett said the committee is looking at affordable housing options in Carmichael, identifying people to contact, and soliciting comment. The committee’s next meeting was scheduled for Monday, March 5 at 6:30 p.m., at Christ Community Church. * Youth Initiative: Steve Young of the San Juan Unified School District said the committee discussed challenges for getting children to school and keeping them there: transportation, basic needs, keeping families together, and teaching parents to help their children learn. He said committee members shared personal motivations such as a mandate to love neighbors, addressing the justice imperative, and the need to find the most vulnerable children. Next steps: identifying the committee’s short- and long-term goals. The next meeting was scheduled for Monday, March 5, at 5 p.m., Christ Community Church.Looking Ahead: * Scott Young said committees will develop initiatives for referral to the large group. He said HART must set up a committee in June to plan Carmichael’s 2017-18 Winter Sanctuary. He also acknowledged that Carmichael HART would need to consider other goals such as mentoring, fundraising, and grant applications. * He reminded Carmichael HART participants “of the power we have in our spheres of influence. Tell others about what’s happening here in Carmichael.”Next Meeting – Thursday, March 23, 6 p.m. at Christ Community (room to be decided). Meeting adjourned at 7:35 p.m.